Soccer, A Kick in the Grass on an Autumn Afternoon 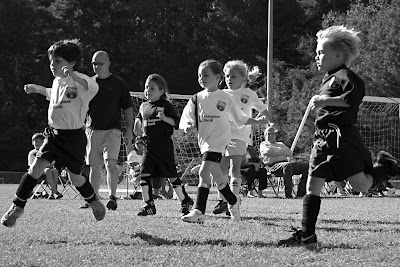 I must confess that I am of the "pre soccer" generation.  I didn't grow up playing it.  Well that's an understatement, I hardly played Kick Ball.  It's only been in the last 20 or so years that I gave it much thought.  Now it's all the rage in Birmingham,  and our Chappell, age 5, is finishing up a rather stellar season.  I got to photograph the last game for these two Vestavia Hills teams yesterday.  What kind of a Mumsie would forget her 300mm lens????? I will blame that on fatigue.  That said,  I did the best I could with 8 cute 5 year olds running all over the field, and spilling over into the adjoining field as well!  As I said , I don't know much about soccer,  but I don't remember 3-4 coaches all out on the field ....well "herding cats" again. My daughter Kathleen was one of the coaches/herders.  She said that it's needed to help keep them "on track".  Well that's the truth!  You might notice that there are boys and girls on the same team.  When did that happen???   In the end, they had a terrific time, showed great sportsmanship, worked as a team,  and to my untrained eye, looked pretty skilled!   Congrats to our Chappy and her teammates for a great season!
The Tune du Jour is "Monday, Monday" by The Mamas & The Papas
PARIS COUNTDOWN....20 DAYS! 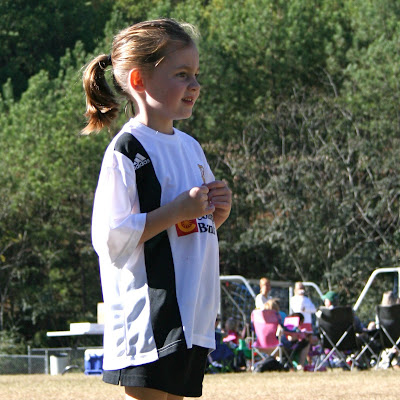 Discover The Mamas & The Papas!
Posted by Virginia at 12:10 AM

Kick in the grass!, Virginia you slay me.

I don't think any of these kids have two feet on the ground and one or two are airborne. Looks to me like you did just fine with the 'short' lens.

Oh my goodness! I don't think we have "mixed" soccer teams here in L.A. Our granddaughter has played now for three or four years - finally seeing progress but understand what you mean about "herding cats" - for sure. Another beautiful grandchild. You are fortunate to have them close enough that you can see them often.

bravo to the corner of the picture, you have put at their level. the photo in b&w is superb (tomorrow I also pictures of children playing football)

The girls play also soccer ??? It's danferous, no ?

They may not know what they are suppose to do, but say kick they ball and they can do that. Cute shot.

Now you really are in my neck of the woods, both sport wise and photography. This of course is my kind of football. As for the photo, no smartipants comments today, flat out brilliant. Everything about it and the enlarged version is a dream. You nailed it! My absolute favourite, and I though I've already had that.
More please.

Believe me, any sports ability that my grandchildren possess did not trickle down from me. Judy, mixed teams seems to be the norm and Web, the girls got right in it and didn't seem to mind the roughness. It's real "loosey goosey" so everyone has fun.

Wayne, you slay me on a daily basis!HA

Shall we watch a real soccer game together? Hardly time for that I guess!

Great action shot! I like how they are all in the air and so intent on chasing the ball. Chappy is so very cute.

Good morning, Virginia. Be sure and check the picture puzzle for the outcome! I think you'll like it.
We had mixed teams wen my son played soccer and it was so much fun to watch them play. The girls and boys each had different approaches but the same outcome: They didn't know or care if they won or lost but boy,oh boy, did some of the parents! I'm glad you had a good time with your grandkids, they'll always have that with you.

Here, in France, soccer is SO important to many, many little boys (without talking about big boys...), I can't imagine they could agree about playing with girls! But we have some teams with only girls, well, not many but they exist.
Lovely photos!

I LOVE the spirited and lively atmosphere you captured in the top picture, V! This photo somehow reminds me of my son. He loves playing soccer after school if he doesn't have to go to his music lesson.

Peter, Maybe we can compromise and TALK about soccer while we shop, oui???:) And it's almost afternoon here, so let's just say 19 days!!!

Eki,
I would think a music lesson is no competition for soccer! How old is your son?

Alice, I don't think the mixed teams last long after age 5-6. I will have to check on that. Yesterday, Kate,the little blonde with pigtails behind Chappell, scored a heck of a lot of goals. They may want to keep some of these girls on their teams in the future!

Hi Virginia,
Thanks for always starting my day with a smile on my face, or a chuckle from my lips, and or a picture of what I miss so much about my home in Birmingham with your posts. You are quite the artisan with your camera and your script! Judy Moore Tedford

Great shot! I watch several of these games every weekend, and I know how hard it can be to take photos sometimes! I don't get the game either, but they seem to! I am envious of your upcoming trip! Hope you post lots of great photos!

Oh Judy!!! How grand to hear from you my friend! So you're the Gulf Shores, AL visitor who checks in so faithfully. Any particular place you would like me to photograph for you or how about a song? I aim to please. I would love to see you when you are in town to see Em.
xx
V

PJ , I am on my way over to see what the puzzle solution is.

Kelly, Not to worry. I have 4 GB of memory and am contemplating another 2. After that I will need to just stop!HA

stupendous shots... the first one as really beautiful movement freeze...

Th B&W photo is beautiful but a father want to take the ball
;-)

Go Rowdies!!!! Thanks for the Birthday Treat Mumsie-Kat

Your soccer photos are amazing! I've never heard of the boys & girls playing on the same team!! Interesting!

nice action shot & I love that you chose b&w - colors would be too distracting here.
I sorta had soccer in high school - being an inner city school, we had no playing field, so we improvised games in the gym!
catching up on your great autumn shots for the past week, as I'm still overwhelmed at work. Hoping to be merely whelmed soon. I need a shot of Jack D. STAT.

What a lovely litttle girl!!
I love the movement on the 1st picture with the ponytail and that blond hair little boy moving...
My daughter was not a very good player but she had a wonderful coach who kept encouraging her:
"Good positioning Delphine"!!!!

Soccer is better than video games, that's for sure. No better way to get some fresh air and exercise.

It's a wonderful shot. You frozen two of them while they are jumping and the B&W make it really interesting