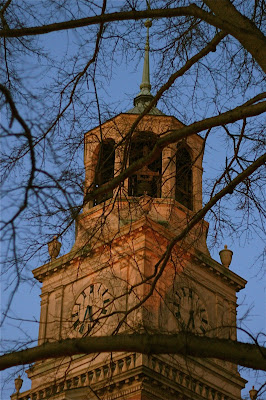 Belltower, Harwell G. Davis Library
Samford University, a private Baptist University, has a special place in my heart.  My mother was the Presidents' secretary for 30 plus years.  It was Howard College  when she went there and I spent many a summer day "helping" in the administrative offices and learning the switchboard. The campus moved from the East Lake location to Homewood in 1957 and became Samford University in 1965  . We lived in the Faculty Apartments and I was a "Samford Kid" as were my girls in later years. They skated a million miles across the campus as youngsters.  Now I'm a Samford  night student in their Samford After Sundown program taking photography and French classes.  This is probably one of the most beautiful campuses you will ever visit.  I hope to show you more in weeks to come.  Today, the belltower of the Harwell G. Davis Library.  Major Harwell  Davis was the first president that my mother worked for and he was instrumental in moving Howard College to the new campus. On as sadder note, we all mourn the passing of Dr. Thomas Corts this week. Dr. Corts was the last president my mother had the privilege of working with.  Dr. Corts was a leader locally, state wide and nationally.  He will be greatly missed. 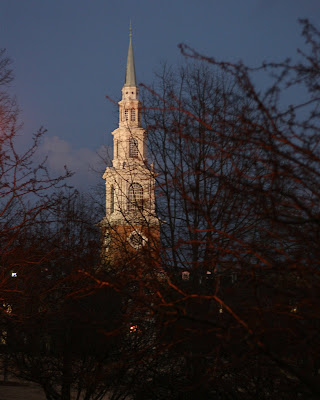 Reid Chapel
* By viewer request I've added some photos to Paris Through My Lens today.
The Tune du Jour is " Consolation" by Michael Dulin
Discover Michael Dulin!
Posted by Virginia at 12:01 AM

Beautiful photos, and an even lovelier, if that's possible, post. My college also remains close to my heart.

As you may know, I love clock towers and yours is a real beauty.
What a wonderful place Samford seems (I do remember the name Howard U.) - it's also wonderful that you have so many ties to it.
I've started an on-line photo course at Kansas State U... It's lots of work but I hope it'll be worth it.
So when are you coming out to meet your CA buddies & catch some rays?

These tower photos are lovely. the light really shows the detail. Very interesting info about growing up at college! No wonder you became a teacher.

I've checked your Paris blog trying to find the Notre Dame photo you mentioned on your comment but could not find it... Have you posted it?

Thanks you for your photos today, and everyday. I, too grew up at Samford, my parents were theatre professors, and my husband works there now. The campus is so beautiful. Thanks, also, for your kind words about Dr. Corts. He will be missed.

Elin ,
Thanks for commenting today. Our family is saddened by the sudden death of Dr. Corts. what a fine man he was.

Bibi,
Actually I attended Auburn University. My mom understood that I needed to go to school away from home. Knowing most of the professors would have put me under the "microscope"! HA

Tash,
Samford was Howard College. Howard Univ. is another school altogether. They were confused a lot in those days however.

JM<
I don't think I posted that Notre Dame photo. I"ll email it to you.

Hey Virg, we ALL want to see the Notre Dame photo - maybe you could add a Paris Bonus Pix once a week or something, d'accord? Next time that I come to BHM I want the FULL Stamford tour - your site is such a delight and so are YOU!
xx,
M

Mar & Jm, I'll stick the Notre Dame ones up today. Guess I didn't think anyone would be all that interested. Warning: it was late in the day and very overcast. Wait...it was that way almost everyday!
V

what a beautiful campus, wouldn't mind seeing more of it if you have it.
I like the geraniums on your header much better than the voodoo masks, just sayin'.
my word verification is picat. honest, I'm not trying to pic at you.

That's a beautifully written post. Straight up it really is. These would be ideal skywatch posts..... Gorgeous blue and the architecture leaves the other Birmingham lacking. I'm sure there must be a link up to the other we you in some way. Leave that with me.
Way past ones bedtime but a baileys night it has been putting the world to rights and philosophical debates have ensued.

B,
Skywatch has gotten so complicated I couldn't for the life of me figure out how to join up so I bowed out. Maybe someone could help me!

You caught that beautiful light that is so fleeting. It just sets everything off in this view through the branches. Love it!
-Kim
Seattle Daily Photo

So sorry to hear about your friend's passing, V.
I can't imagine what fun you had growing up on a campus, you must have had quite an adventure.
When I was in Cambridge, MA last year I was shocked how, um, unattractive Harvard University was. They have some outstanding architecture, but on the whole it was not a beautiful campus. The University of West Florida here in P-cola is much nicer! I've heard about Samford for years, I didn't know it was located in Homewood. The tower is so lovely.

You must have had such an interesting childhood living on campus and a lovely one!!

We have a few college students online from college of Jacksonville-State-University and we love your blog postings, so we will add your rss or news feed for them, Thanks and please post us and leave a comment back and we will link to you. Thanks Jen , Blog Manager Samford-University

I love it ! Very creative ! That's actually really cool Thanks.