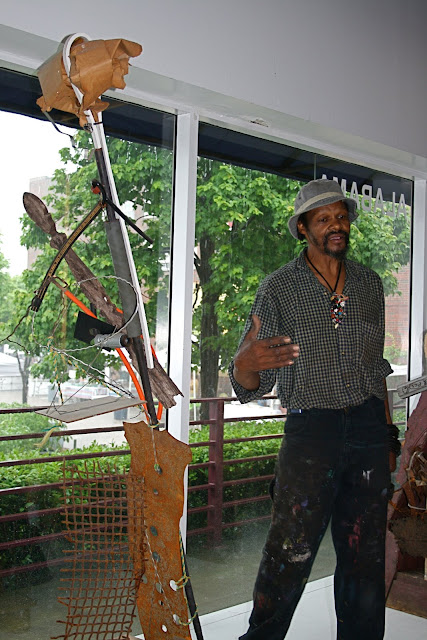 You've already met Birmingham folk artist Lonnie Holley here and here . Lonnie has a story to tell. Raised 7th of 27 children Lonnie, known as The Sandman, began his artistic life when he carved headstones for his sister's two children who died in a house fire. He used the soft sandstone like material that is a by-product of metal castings he found at a nearby foundary. The rest is history. These days Lonnie continues to carve, but he also paints, and makes some mighty interesting sculpture from found objects like the one above. And when I say he has a story to tell, indeed he does. He held an audience spellbound this day at the Lite Box Gallery at the Pepper Place Market. But in case you think he's just a local artist, think again. Lonnie's work has been exhibited at Atlanta's High Museum, the Smithsonian, New York's American Folk Art Museum and.......the White House! For more about Lonnie's remarkable life go here. 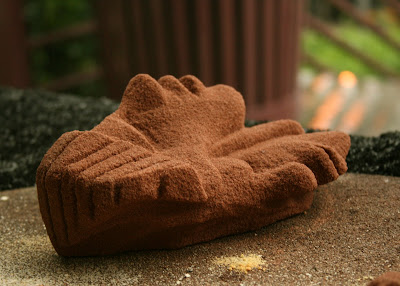 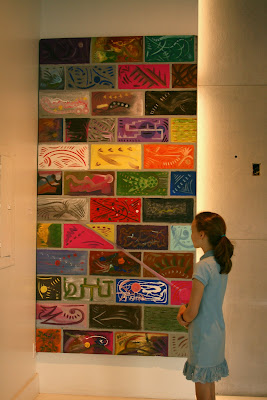 I am pleased to announce that two of my Paris street portraits are being featured on Parisien Salon.com. This is a terrific site and I hope you will give it a look!
Posted by Virginia at 12:01 AM

Nice to read about the art and story telling abilities of the Sandman! :-)

Congrats on your portraits getting featured on parisiensalon.com.

He seems to be a very professional man !! Great Post..Unseen Rajasthan

How in the world does one come from a family of 27 kids??? His poor Mama...I can't even imagine!!! He does have a fascinating story...and interesting art work...What an American treasure!!!

OK, back to work here. It's remarkable what Holley has accomplished with a combination of freedom, creativity and talent. And congratulations on having your work published in Parisien Salon. Geez, I've never had anything published in even the Podunk Salon. Those Parisians in your pictures don't work very friendly, though. My experience has been that they are always welcoming and helpful, expecially if I try to speak a little French.

BTW, I really did get you something in Lhasa. Now that my head is screwed back on, I'll try to get it out on Monday.

Bob,
The waiter and the chef were VERY friendly, I just caught them without them knowing it and I 'll admit they do look uninterested in my photo. The other guy I caught from above, and he was unaware. I loved the wine bottle but I really don't think it was his. I was with Meredith Mullins at the time and she volunteered to go down there and whisk the potato chip bag off the bench for me!HA Another plus for BW!!!! Glad you're home and caught up with your sleep!!

Virginia you're getting so famous you'll soon need to have a buff body guard! I'd be happy to help with the interviews!
Spread your wings gurlllllll!
xx,
M

Very interesting. Hope he makes his way to NYC. Off to Parisien Salon to rub elbows with the rich and famous !

I've not heard of this gentleman but he seems like a most interesting artist of various talents...nice to see a local make good! 27 children? Omigod!

I shall also offer my congrats to you re: your photos! That's quite an accomplishment!

congrats on the feature

his work is definitely beautiful

The Sandman has a fascinating life Virginia! Such diversified art pieces...

I remember him coming to my elementary school in 1986, I will always remember how fascinated I was with the sand sculptures and what a great spirit he brought with him.