France in the South 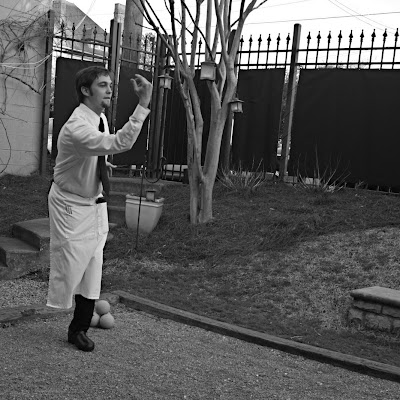 On Tuesday three friends flew off  for several weeks at La Bonne Etoile,  an artist retreat in Fontaine-Ardenne, France.   Pardon moi, but my French envy is showing!   I was left behind , but I am celebrating their bon voyage by focusing on all the lovely places in  Birmingham that remind me so much of France.  Euro Birmingham  perhaps????  Today's photos were inspired by Jilly at Menton, France Daily Photo, who has posted a series of  photos of the *boules ball competition in her city .  The top photo features a most cooperative waiter at Chez Fonfon who was kind enough to give me a demonstration.  The second photo shows the boules area out back of the restaurant.   France in the South or the South of France,  a game to be enjoyed in any language.
* also know as petanque. 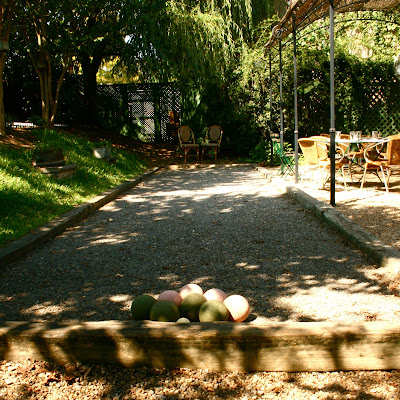 The Tune du Jour is " Les Yeux Ouverts"  (The Open Eyes)  by Enzo Enzo.  I'll bet you Mamas & Papas fans will recognize this tune.   I really like this version!
Posted by Virginia at 7:38 AM


I love Enzo Enzo (especially in duet with the singer french Kent) superb choice of song. I am surprised that American know!.

Beau b & w this ball player.

Oh that's fabulous, Virgina. This guy really has the knack of throwing. And thanks so much for the link to Menton DP.

for some odd reason I can't play the music. Maybe I need to download something? Sure I've heard your music before tho so perhaps my PC is having an off day.

This looks very much like the one in Mandres-les-Roses, southeast of Paris where "Louis" stayed for a time when he lived in France.

I'm sorry you couldn't make it to France but good for you to bring France to your own back yard!
Great photos!

The back of the restaurant could be in France. Those pergolas/tonnelles with the bamboo over are very popular here. I'd like to put on in the back garden.
I hope your friends have a good time in France. Maybe you'll make it over to see us french bloggeurs!

I saw some guys playing boules in the Jardin de Luxembourg during my brief visit to Paris. I'm telling ya, V, your local garden is just as pretty.

Mais oui Angela, November 16th to be exact. Wish you could come to Paris. We could have such fun.

Thanks Knox. Come on down and we'll go one afternoon. Wait till you see inside. More to come. Yes, Louis, you're invited aussi!

Charming! I thought he looked like a waiter when I saw the thumbnail in the portal and wondered, "What the heck is he doing?" =D

How very Provencal! I don't think my aim would be at all straight after several sips of Pernod.

So see you in Paris November 16th? For a game of pétanque?

Thanks for this nice tribute!

Virginia, that first photo is one of my favorites so far. I love EVERYTHING about it -- contrast, composition, whimsical subject, action shot, candid capture...

And you're right, it does look like a French setting, doesn't it? Tres beau!

Last weekend I had the pleasure of attending a birthday party in this very spot. The food is just as lovely as the surroundings. French cuisine, twinkling lights, boule and Sancerre....... it does not get much better! Unless, of course, you are in my favorite place, France.

Bonjour mon amie! The waiter photo is wonderful and a perfect choice for BW. Well done!

See? My daughter Melissa has all the fun in our family. Of course she is the one that took me to Paris in 2007, so I have her to thank for my love of all things French!

I like the moment you captured here. It's expressive.

BTW, I've answered your email. Sorry for the late reply.

Lunch time here and is it beginning to rain. No Bocce for us. We call Boules, Petanque, Bocce. Love the game; I enjoyed your post today and Jilly's post yesterday depicting this fun outdoor copmpetetive game.

These boules are huge ones! This place could be in France, even if here in Britanny, the weather is just...less sunny this summer!
You can see many people playing "à la pétanque" in the South but in Arradon, some areas exist too.
Lovely song!

Virginia these photos really transport me to France! You've really captured the French essence. How delightful that you can travel to France without even leaving Birmingham! Plus the dollar is stronger there than in France, although I'm pleased that the dollar has been gaining strength lately. By November when you're there maybe it will have really gained against the euro.

Katie,
Keeping an eye on the dollar/euro situation. It may be bread and water, but it'll be a baguette and Perrier!HA
How do you say in French, "I would like a glass of good cheap French wine please" ???

I should have included this, but I was too busy being a show-off with my translation:
Virginia,
I know that you must be a true friend to delight in others' good fortune. My time as a little French girl in Beaulieu-sur-Mér remains some of the happiest of my childhood. It knew even then it was something special to go to the town square before catching the bus to go to school and paying 25 francs for a beautiful bouquet of small pink roses for teacher. We had a boules set for years and I don't know what happened to it but I still remember them with fascination.
You've made the perfect post. And I'll put my image stitching on Flickr as well.

France in the west is beautiful ! Like Le Pays de la Mée !

This is a game we used to love to play, but it has been awhile.

We really enjoyed our stay in Perdido Key. The last day was beautiful weather.

I love the portrait! Well done!

Bartenders to play balls, we will wait it for a drink

Euro Birmingham. Count me in. This is a wonderful idea. My spiritual home is France, the South. We have many teachers here from France and poor things the island is a strange place to them. Gray and I constantly hound them about all things french. I shall put my beret on, open the wine, and nibble on the brie. Beautiful song too. Merci Beaucoup, Or ta very much as we uncooth Brits say.

Bergson, welcome to my blog. THese bartenders are swiift. Your drink will be up in a flash!

Steve, sounds like you are safe and sound back in NO. Glad you got some Gulf coast hospitality. Next hurricane (hope there won't be one) you and Linda just come straight on up to B'ham. We will roll out the red carpet.

Virginia...ah, your blog is another slice of heaven. Merci for the email. I recognize a few of the bloggers. Is that LaVache here too? LOL :-) Say on another note, did you know that I once had Alabama as my address? Yepper, I lived south of Birmingham down in Mobile back in 87-88...US Coast Guard. Made some good friends there and also in New Orleans. Don't miss the nasty hurricanes though. But do miss the azaleas and the dogwood in the spring. Since I'm new to your blog, I will spend time going to your previous posts. Look forward to this. To your photo...I've always wanted to play boules. Do you think it's that much harder than say a game of horseshoes? Again merci!;-)