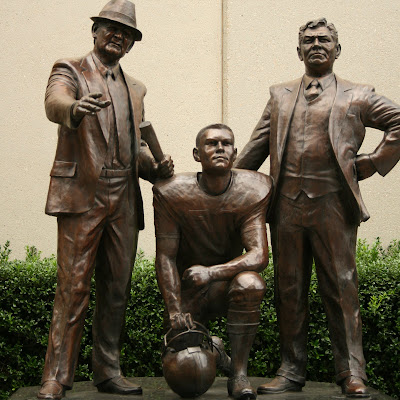 If you live in the state of Alabama, and especially Birmingham,  you have a major choice to make.  Auburn or Alabama?  These two major universities claim a majority of the most loyal, enthusiastic,  and sometimes even overzealous( the word rabid has been used)  football fans anywhere around.  Now we have many other great football teams in our fair city : UAB, Birmingham Southern, Samford, and Miles College to name a few.  However, on any given Saturday in the fall, the Auburn/Alabama fans can be seen all over town proudly displaying their true colors.
The statue above is a tribute to two of the legendary coaches from these two teams.  On the left is Coach  Paul "Bear" Bryant, who was the much revered head coach for the University of Alabama.  On the right is Coach  Ralph "Shug" Jordan,  Auburn's beloved former head coach. This statue is near the SEC Headquarters and the Alabama Sports Hall of Fame.
The photo below is a photo of the flag that I proudly display outside my home during football season.  There you have it - my true colors.   D. over at Tuscaloosa Daily Photo is a wonderful resource for more  Univ. of Alabama slanted photos on her blog.  That's the best I can offer in the way of "fair and balanced".
A SPECIAL NOTE:  Many thanks to Jimsey,  whose website Magic City Moments has featured BADP and Marie Reed's St. Fargeau Daily Photo.  Magic City Moments is a terrific site to find out what's happening all over Birmingham.  Thank you Jimsey for giving our blogs a little publicity and for featuring some of my recent photos.
No surprise here.  The Tune du Jour is "War Eagle" by the Auburn Marching Band.  Click here. 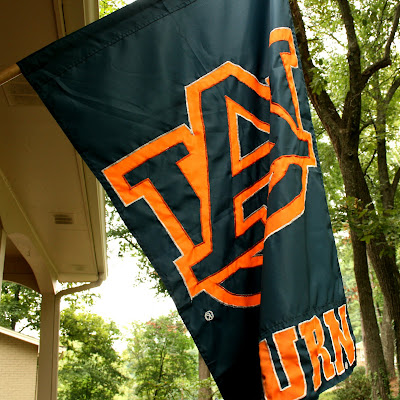 I have to admit to being a little baffled by this whole football thing but I do like the natural poses of those statues..
Have a nice Sunday

You're right, Virginia. Just allow me a precision: "regard" means "eyes". Have a great Sunday!

I also live in a university town known for its college football history,traditions, and many championships. Suffice to say, we are in a rebuilding phase. Alabama and Auburn are both looking good; however, I think I'd give the nod to Alabama (sorry). Oklahoma (at this time) would get my number 1 vote though. They are a force to be reckoned with this year. College football is exciting, and I always look forward to it. Have a good weekend.

WAR DAMN EAGLE!!! Love this one!!!! I think we pulled this one off due to LK wearing her AU cheerleading uniform to Davis' party!!!

In Ga of course we had alot of Alabama fans but here in Va we don't see them. We are really close to VT so alot of Hokie fans, but I don't understand what the Hokie Turkey mascot is all about. My kids are still Bulldog fans!

Thanks for the link!
That was very fair and balanced of you, bless your heart.

Well, I just got home from the Cardinals game (big win to end the season). These guys look pretty sure of themselves, Bryant perhaps a little condescending, Jordan a bit imperious. The young man between them is under their spell.

war damn eagle right back atcha and alas, poor rocky top! I sure do enjoy those away games.

S.T. I am not touching the comment on "The Bear"ha. I take it the Cards won. A fitting end to their last season???
S.T. a nice ending to the season and the team?
Knox, Give me credit for not rubbing it in on my comments today. I try at times to be a good sport but it usually doesn't work!

D. Thanks for picking up my slack for the Uof A.

Alice and ANgela, I am aware that this whole thing is something the French don't "get". Maybe soccer comes close ????

Tanya and Coltrane, I will gladly root for your teams if you'll root for mine.

Anon/Kat- of course our little cheerleader brought us luck. We need a heap of it this season.

Yes I am feeling A1. We sadly lack any kind of statute im Ramsey. Off hand I'm not sure who would qualify, but I'm sure we could think of someone. I'm more your soccer or to be confusing as we know it football variety. Sounding like me perish the thought! It ain't priddy when I unleash the gob. I should engage brain before mouth.

Ok if you want to visit Auburn 24/7 just go to www.toomerscornerlive.com and check out the webcam !! Auburn alums from all over the world visit daily.

War Eagle and Beat Bama,Georgia, Vanderbilt,Ole Miss,Arkansas, Tennessee-Martin and West Virginia and who ever is the East Division Champ. On to Miami in January !!!
With a new quarterback!

Hello Virginia !
You da play football ?
Smile Too You.
See You later.

I will have to see this sometime! I must add that Shug was a Selma native, and Auburn seems to be the most favored team in these parts!