Asleep On The Job 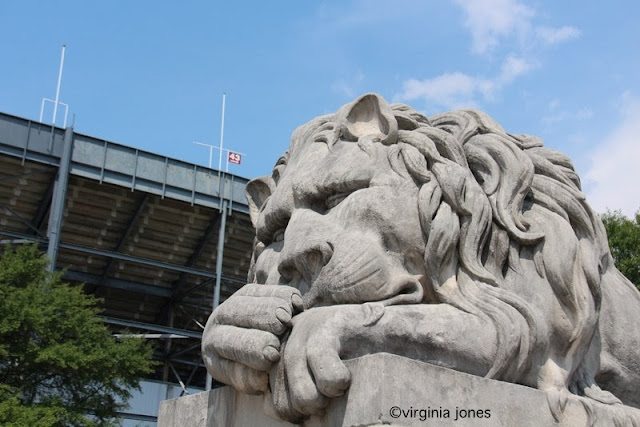 Legion Field in Birmingham's Graymont neighborhood was dedicated in 1927 and was the site of many many college and high school games.  Auburn and Alabama played several games a year there and annually the Iron Bowl until  2000.   In 1996 is was a soccer venue for the Summer Olympics held in Atlanta.  Of note, I participated in the Opening Ceremonies here in '96 myself. Talk about your 15 minutes of fame!

A pair of these limestone lions flanks the entrance on the south side of the stadium.  Shhhhhhh!
Posted by Virginia at 12:30 AM

After 94 years, he deserves a little rest!

I attended the soccer game in '96! Were the Opening Ceremonies at that game?

It is not often that you see a sleeping lion as headstone at an entrance. Perhaps visitors must get the impression don't wake me up or else.

I've been there several times, including one of the Olympic soccer matches, but I don't think I've ever noticed these lions. Cool.

scary costumes
thanks for sharing such a nice post......

oh he is so sweet looking, reminds me of our Harry

You participated in the Opening Ceremonies in '96?
Were you the one with a wardrobe malfunction or were you the one that was focused on keeping your flaming baton away from your jaunty cap?

Fancy Horse, There were many soccer games played here that week. I proudly brought out a huge flag of Ghana with about 6 teens. Dressed in white shorts and tee shirt, I'm very glad there are no photographs!!! I still have the straw hat that all Olympic volunteers wore that year with several pins. It was a fun time.

Mary, I still have my jaunty cap and luckily nothing that flamed was involved!

This is a cute photo. Why anyone decided to put a napping lion up on that pedestal is beyond me!

Well, the real ones do spend a good part of the day sleeping, after all....

Oh, how well I can relate to that.