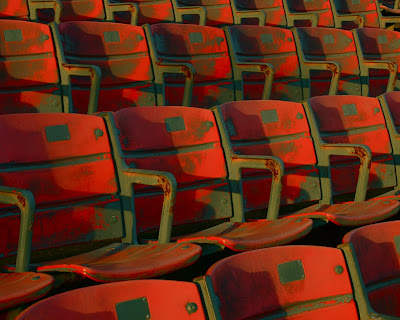 We've been to Rickwood Field on many occassions ( here, here and here!).  I would say this is the last post,  but I can't be sure I won't go back and get some new photos.  By now you all know it's America's Oldest Baseball Park,  and I guess the seats are starting to look a bit worn.  But come to think of it,  shiny, new seats would just be wrong!
*  Yesterday I had some clever viewers who tried to guess where that photo was taken.  The answer is .....Mountain Brook - Birmingham's most upscale suburb.  It was shot behind two recent posts: Charlotte Woodson Antiques and Gilchrist!!!  I'm including a photo of the block where the alley is located. 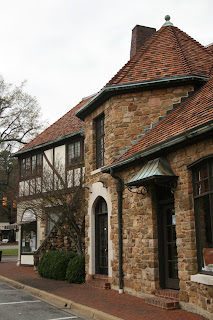 Those chairs are awesome! That park certainly seems to be photogenic!

this makes it very well, nice picture not easy to do.
I love the house

It's an exhilarating sense of freedom, isn't it. Now to harness it ...

The angle of the arm rests and the rust holes are just terrific. The blunt red is a first for you. The shadow could have been more intense that that is under some-one else's control!

You could maybe have avoided the white rail as there were probably more rows up you could have gone.

I like very much the trajectory of these last few posts. They are just a bunch of unrelated seats and look what you have been able to do with them.

Yep, old seats tell a history, and new ones just won't do.

Love the patina on the old chairs. Good times.

My kinda take on seats ..

Julie,
A little crop fixed that problem. Thanks for pointing it out, I let that get by me!

They don't look very comfy but I can see why new chairs wouldn't be right.

Oh, the stories these seats could tell! I agree that new seats would be wrong, wrong, wrong!

The chairs above are a great fine photo-work. Colors matched perfect! A picture for my galery.
Juergen

Well, you have to admit that I was warmer than warm when I guessed behind Che Fon Fon...my last guess.
I had figured out it was RIGHT there before us...or else you might have given a clue. Anyway, you kept me guessing. I love the stadium chairs!

Not much for baseball - don't like to sit that long but these chairs are pieces of art!

Truth be known, I'm not a baseball fan either. The trip to RIckwood was a photography class field trip last spring. Honestly, I dreaded it! Once I got there I fell in love with the place and found many wonderful places to photograph. It is a Birmingham treasure for sure!!

Oh, yes. Opening day here is a week from today. Those seats are so worn and so glowingly bright they look like they were set out in the desert as test subjects during the Manhattan Project.

Bob,
Only you would have come up with that. That's why I love your visits my friend!!!!

FireLight,
You and your hubby were great fun. I can't wait for you two to come to B"HAM so I can meet you in person.

excellent composition of these colorful and intriguing chairs. I am really enjoying the photos on your site. I have signed up as a follower and look forward to more photos.

OOoooo, enough empty chairs for ALL of us to sit a spell and visit with you while waiting for the boys of summer to get back in the park and play ball. Love the worn colors.
-Kim

I love the colours of these chairs. It would be a big mistake to change them!

I'd take the seats over the house, which looks strangely British. New seats so staid, we need colour and faded beauty.

Many will notice for the first time the seats they were on and remember the games they were at.

The 1st shot is brilliant! Love repetition shots like this one.
The 2nd is lovely, gorgeous architecture and spot too!

I am not a baseball fan but I am a fan of this park seats!!
A photograph I truly enjoy.