Have a Seat- Table/Chair Series III 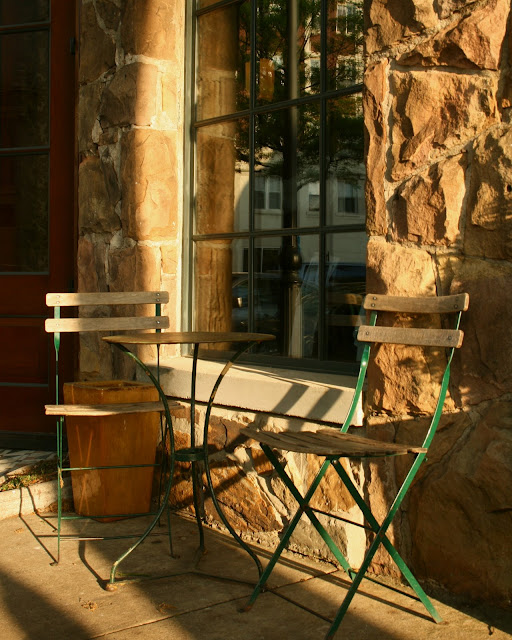 #3 in my  *"Table and Chairs Series" this week can be found at Chez Fonfon French bistro in Birmingham's Five Points South area.  We spent several days here  last September when my friends flew off to La Bonne Etoile and I was suffering major French envy.
* Merci Kim at Seattle DP for the idea of making this week's offerings into an ongoing series.
Posted by Virginia at 12:01 AM

Beautiful light and shadows V. . .this is so inviting. I love the inclusion of the window and reflection. Was it as warm as it looks. I'm glad you have sunshine. I've made you some coffee and a panna cotta with fresh fruit. Let's sit down and catch up!
-Kim

Oh, it's so warm and inviting! What nice light. Did you take this at the end of the day?

Ah, so nice, and I love the name Chez Fonfon!! I'll have to dig up a Belgrade chair for you!

Sorry your friend lost her wallet to gypsies in Paris---I've written a comment about this on my post today.

Nice shot ! Are the waiters french at "Chez Fonfon" ?

How beautiful. I would just love to linger there.

Babzy,
No, the waiters are as southern as can be! ha

Bibi,
Would love for you to join the series with some Belgrade tables and chairs.

Kim,
that sounds delicious. Come on!

This is a very provocative idea. I hope some of the good photogs on this side of the continent join in as well. (Maybe I'll drop a hint or two.)

Lovely spot and photo, V.
Have a great weekend!

J'aime beaucoup le nom "fonfon" and I love the warm tones of the photo.

I have a weakness for lights and shadows... therefore for this picture Virginia. You captured everything!

I was just fixin' to say, "You like to take pictures of tables and chairs!"

This is lovely and makes me envious as is really pouring with rain here....really! Your photo is tres bon!

FonFon is Francois' nickname! That's what his family calls him:)

Bath DP,
It's poured on and off all week here. We are sunny today but it rained last night. That's spring for you.
V

RR,
I didn't realize I had a trend started this week till Kim pointed it out so I found a few more to use today and later on.

I am going to visit this place one day during my spring break. Are you on, Virgina?

The photo invites us to listen to a conversation, see two people, watch their faces and hands. The viewer has to imagine them. Splendid use of implication.

Should draw inspiration from these photos. Indeed, a great photo. To be able to see this photo would have to be multicultural. Friends have achieved it. Congratulations. Best regards.

I remember this scene, or one like it when it was a header and it's one of my favorites. The light is delicious.

PJ, when you come on up here, we'll find some more fine light and shadows!

Bob,
I"m thinking having some folks in this shot would have made it more interesting. I'll work on that OK?
V

A beautiful atmosphere, V!! Inviting to go to Paris straight away and enjoy sitting on a little terrace enjoying the Spring sun while looking at people walking by!

What a lovely spot! It's definitely the place where I would like to have a coffee with you one day!