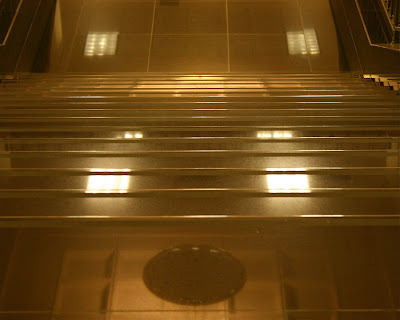 Today we step inside the beautiful Harwell G. Davis Library on the campus of Samford University.  Major Davis, as he was called,  was president of Samford from 1939 till 1958 .  He was instrumental in moving Howard College from East Lake to this magnificent campus in Homewood  where it was renamed Samford University in 1955 .  I had the privilege of knowing Major Davis.  My mother was his secretary for many many years. This library is a fine tribute to this kind and gentle man.
While I was in the building I decided to look around and take some photos.  Actually, the steps are black marble,  but the lighting turned them into this warm golden color.  I'm adding a ceiling detail as well.  You can see its reflection on the stairs.  While I was wandering around, a young man stopped me and asked if I taught elementary school. He was one of my former students that in now in his second year of law school!  I recognized him beard and all.  It was so great to see him again,  and he wasn't too big to give his third grade teacher a hug! 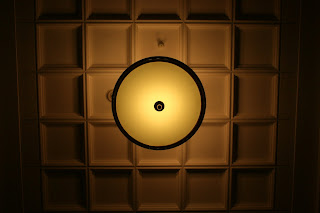 as usual, superb management of lights, I love the second photo

Ooooh, lovely. Had to look at this one a bit to see it wasn't an 'abstract'. Really nice.

That's what I love - unique style and color - formidable!

Fabulous shots, the stairs had me nonplussed for a moment!

I think our barbecues are not the same than yours but yes, we have! And we've just bought a new one a few days ago. And guess what? It's a Weber ;-))

Magic steps!
From kid to adult and still the same... so moving. Hugs remain,

Hope he didn't have the beard in elementary school.

Wow! Gorgeous photo of steps and ceiling. How nice that your former student recognized you. That's the best compliment!

You must have made his day,it's always a lot of fun to meet your teachers !

You've got the Golden Shot here! Nice of your ex-student to give you a hug, you couldn't have been that scary a teacher!

Marley,
Well I ran a tight ship but guess I wasn't that scary!!!
I remember him so well. He also had this wonderful grandmother that baked the most fabulous pound cakes and made the world's best cheese straws for me.
That didn't hurt. :)

Therese,
You're my guest photographer one day this week!

Alice,
I have a Weber grill as well! I will be grilling chicken for my blogger friends tomorrow night!
Check back tomorrow to see who it is.

When you say third grade teacher, how old are the children in this class, please? Our French system is quite different!

So it all came full circle? It must be satisfying to meet up with a former student who feels such affection for you.
Beautifully lit subject matter today, but you know I love how you manage/handle light.

No one ever forgets their favorite teachers. What an impact they have on our lives. (I have forgotten the bad ones, though.)

What a great story.

I'm mesmerised by the second one.It's very opitical illusion. I can safely say from the supply teaching Gary has done here at the local school, former pupils don't do hugs. They do beer in the pub though, in fact one of my latest best buds here was a former pupil and he and his old English teacher, another bud, are firm friends. Rather insular world here.

A little French Flavour keeps bouncing back. Will try another email account. Hotmail and the isle just not at one.

Wild color effects! I would never have guessed it was black marble. The bottom picture could be an illustration from a science fiction story.

Awwww! It must be great to get recognized by your former students like that. Nice light in these shots!