Thursday With Ted and Mike 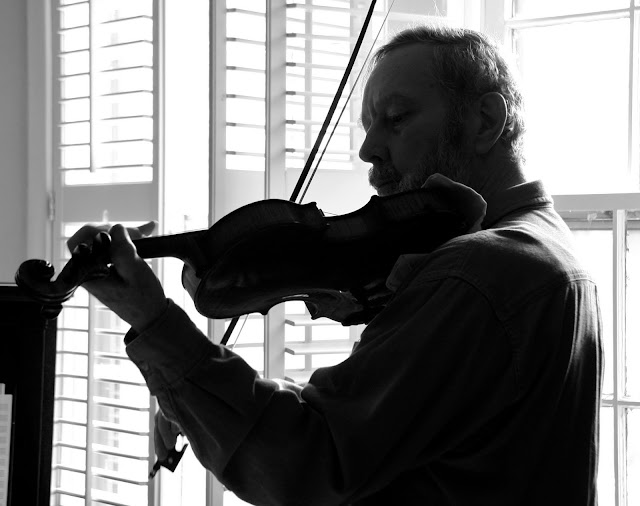 Today was just a great day. As many of you know, I work part time for my friend and very, very talented pianist, Michael Dulin. Well today Mike asked me to tag along with him and photograph his good friend Ted Haddin. Mike has a new website and it includes a blog. Guess who does his blog each week? Well our visit with Ted is Mike's featured post for tomorrow, and I decided rather than reinvent that wheel, I'd just let Michael Dulin do the talking here today as well. That works for me!

"On Christmas morning, I received a delightful phone call from a dear friend of mine, Ted Haddin. As a Christmas greeting, he read a Christmas poem that he had written, then dropped the phone and played the beautiful Coventry Carol for me on his 250-year-old violin.

Ted's a true Rennaissance man, with an astonishing range of talents and interests. He is a published author and poet, a former professor at UAB, he taught not only English literature, but Russian, German and French literature as well. He is also a very fine musician and gifted raconteur.

So, bright and early Thursday morning, Virginia Jones ( my new photographer-in-residence, remember?) and I set out to pay Ted a visit at his home. He serenaded us with some old standards, a little Fritz Kreisler, and at Virginia's request, a lovely rendition of La Vie en Rose. I even accompanied him in a performance of a Corelli sonata."
May I add a big thank you to Ted for opening his home to us today. I was the lucky girl to hear both he and Michael play together! He let me rearrange his furniture for a better photo op and was so dear to play the loveliest version of La Vie en Rose on his pricelss violin pour moi. Merci Ted!

And for my Birmingham readers, if you're very lucky you might be at Nabeel's in Homewood on a Friday night have the pleasure of hearing Ted play! 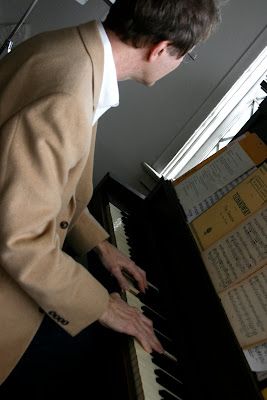 Mike accompanies Ted on the piano
Posted by Virginia at 12:01 AM

Oh V - You know I love Michael but I am greedy - I want to hear the music here too - not just see them. Thanks for sharing this much!

What fun!!! I love talented musicians!!!

Olivier also has a violin play on his CDP posting today! I play violin, too! Wonderful photos of Mike en piano and Ted avec son violin! Rock on Vivaldi, rock on!

Thanks for the sharing Virginia.
Have a nice weekend!

I always forget, not sure why other than mt brain is seeping info, how fabulous your portraits are ..

I have a recurring dream that I can play the violin. And it feels like this.

What a fine monochrome image, Virginia!
And La Vie en Rose for accompaniment... Oh, my!

What fun and what a lucky person you are! Very nice portraits, V!

I bet he's overjoyed with that portrait! Marvellous.
So, you'll have to be interviewed to see how it feels to be a "photographer-in-residence" - I have a new aspiration!!!

Tash, I am also VP in charge of Shipping and Handling and DIrector of Worldwide Tours. My job description is whatever we can make up! HA

Jacob,
I am a lucky girl and I know it!

Judy, we are working on getting some of Michael's songs on Youtube. You can also go to his website and listen! :)

Thanks everyone. Your kind comments mean a lot and help make me try harder every day!
V

Were you and Olivier conspiring on the subject today? The silhouette works well. Even with the strong backlighting, he looks a lot like Tennessee Williams to me.