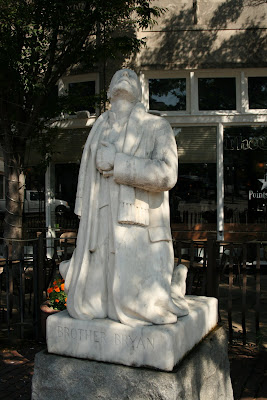 Times are hard everywhere right now ,  and Birmingham is no exception. Every time I turn on the news, I hear that the homeless shelters are experiencing record numbers. This week even here in the deep south we have had freezing temperatures.  I wonder and worry about my friends that I have met at the church breakfasts.  I think today is the perfect day to introduce you to a very special Birminghamian, fondly known as Brother Bryan. He is one of our hometown heroes.  The pastor of the Third Presbyterian Church , he is best known for being an outspoken supporter for civil rights and racial reconciliation and his selfless service to the poor in Birmingham.  Maybe I should mention that this was in the early 1900's!  It is said that often he arrived at home at night without his coat because he had given it to a needy stranger during the day.  This tribute to Brother Bryan can be found in the Five Points South district.  It has been moved several times and I personally regret that it now rests next to an outdoor seating area for a local cafe.  I think Brother Bryan's statue by artist George Bridges,  deserves a more dignified resting place.  On the other hand, it is in close proximity to an area where many of our city's homeless can be found.  Perhaps it's the perfect place for Brother Bryan.   This holiday season when you are out purchasing gifts, please remember those that for whatever reason need a hot meal and a place to rest their head.  Brother Bryan set a wonderful example for each of us.
Posted by Virginia at 12:01 AM

This is so beautiful, Virginia.

A lovely post, Virginia. Thank you for reminding us that there are many who can use a hand up at this time of year.

Times are tough, an excellent reminder to lend a haleping hand.

Thanks for the this photo and information. I never knew anything about Brother Bryan, just that he was a distant relative of mine.

Good afternoon, Virginia. The enlargement is really wonderful and your thoughtful words very comforting and quieting during this season of Advent.

I've been a little bit behind with my blogging ... It's been a hectic week at work ... I'm trying to catch up with what I have missed though both with my post and my reading of my friends' blogs ...

Now let's see which photos of yours are my fave this week:

That Noel and Grand is a perfect choice for the theme day, V. I like the patterns and colors.

And that fog over the forest and curvy road has a dreamy feel about it ... IT's just BEAUTIFUL!

And that mother and son somehow reminds me of a National Geographic photos ... Very nice and expressive!

Have a great weekend, V.

Times are tough. We have record foreclosures here where I live. Property taxes that support schools and government have dropped way off. People wring their hands in concern but I think we are on our way into a new Great Depression. I would like to give George W. Bush as much credit for it as he deserves. The problem is I don't know how much he deserves.

Here where I live in Southwestern Ohio, north of Dayton, the home of aviation, the Wright Brothers and Paul Lawrence Dunbar, the poet; it is snowing and has all day. It is 27 degrees F ( -2.7 C)and roads are a mess.

I wanted to thank you for your visits and for keeping track of me while I have been both in and out of the hospital.

For those of you who don't know, OUR Abe Lincoln has been a very sick man and thankfully has busted out of the hospital and is now home in the care of his wonderful wife Patty. Abe thanks so much for your visit today. More hugs,
V

Eki,
Don't apologize. As I have said before, I am pretty sure work comes before blog visits! Come when you can. OH and call National Geographic for me and give them my number!HA

As a side note to today's post. I saw my friends at the breakfast for the homeless today. It has been very cold this week and they were t reated to a hot breakfast. (Saturday is hot breakfast day) and they were so appreciative. I have never seen as many come through that door. Almost double the number I would estimate. Hard times indeed.

I'm in the Eki camp. A remarkable man, the post subject and the image exudes a very fitting atmosphere.

When I lived in BHM, Brother Bryan's story was an inspiration. Years later, serving now as a pastor, Brother Bryan's story is a model for me of living after the example of our Lord - putting ourselves in the streets and lives of those who are suffering, and even more so these days when times are like Brother Bryan's days of walking with and standing for the ones suffering economic hardships of inthinkable proportions. Thank you for this tribute in your blog which I read for inspiration for a sermon on walk ng in faith