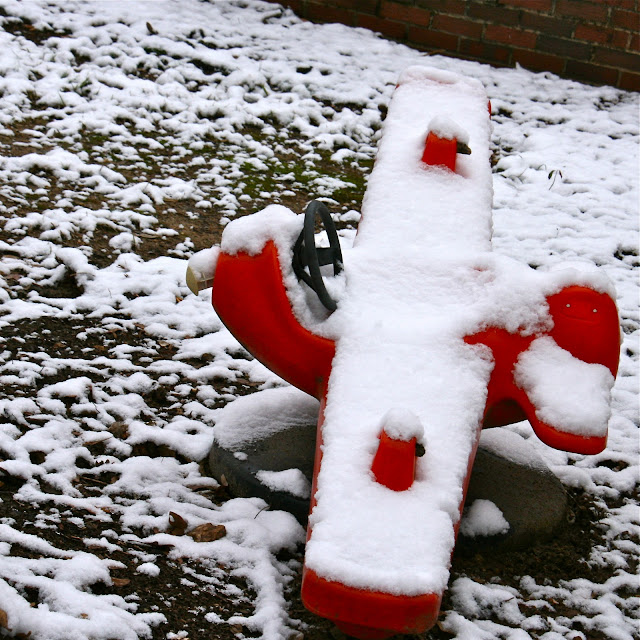 Rockford Road International Airport closed due to snow
I think I've rubbed this in enough, but just in case... here in Alabama we have the best snow situation. Most of the time it snows, well we might have to close the city down for a day or two, but then it melts and life moves on.  Sometimes.. it's even better. Well it snows like the dickens and then the next day by noon we're back to normal. Talk about the best of both worlds!  That's what happened Wednesday night.  We had us a really pretty, fluffy snowfall but by morning we were all good to go!  I can't even remember a time we had snow when the schools were open that morning. Lord have mercy, we're acting like a bunch of Yankees around here! :)

My thanks to Maureen and Cliff Holt , Little Savannah Restaurant and Bar, who graciously allowed me to exhibit my photographs for the coming month. We had an opening reception tonight and I was so thrilled and touched that so many of my dear friends stopped in.  Special thanks to my daughter Kathleen and friend Martha Ann Doyal who helped me hang the exhibit. Without them, it would not have happened. My Right Brain has totally taken over.... I was pretty useless.
Posted by Virginia at 12:01 AM

The cutest little thing. A great addition to your red series!

Love your comments about our great snow. The Rockford Road Airport made me laugh out loud. Love your words and photograph in each thing you post. Love ya

Nice shot of the red airplane. Glad you had a good time at the opening of your show!

Can't wait to see photos of your opening night - I hope that you gave your camera to someone else so that we might see a shot of you holding court!

Are you sure that white stuff is snow??? Looks more like a washing machine overflowed!!!

The last snow fall I remember at bay level was in 1972. Sometimes there's a dusting at higher elevations in the hills, but maybe once every couple of years.

Have fun at your show opening.

Oh, I hate it that I missed your opening! I would have loved to have been among those who came out to cheer you on.

The wee ones need their plane de-iced before takeoff.