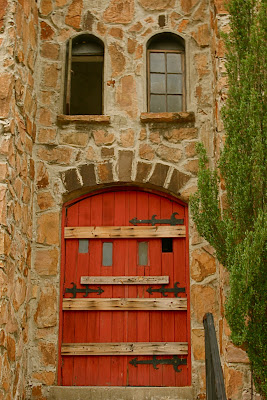 Quinlan Castle sits atop a hill on Birmingham's southside.  As a child, I was always fascinated by it.  Built in 1927,  the design is reported to have been fashioned from a French castle visited by two of the owners after World War I.  It originally housed 72 efficiency apartments.  Vacant since the 1990's , it has been vandalized through the years.  The good news is that it has recently been sold and hopefully the new owners will find a way to restore the exterior and preserve the character of this Birmingham Landmark.

Who wouldn't want to live in a castle? I hope the new owners do a great job of remodeling. Keep us posted.

This is captivating even for an adult, naturally you were as a child. Lovely shot and great mood. Have a great week-end. :)

The red door fits remarkably well with the bricks! Lets hope that the bars will soon come off as the building is renovated. It looks like it could be a wonderful place to live after renovation. Hope it goes well!

*PS. I meant to say "stones"--they are a wonderfully warm shade.

Awesome - do they need a decorator for the model??? Your daughter and I could do a smashing job!

What a quaint structure and a photo of contrasts. Hope this place gets restored.

Wow I love this place! You've really captured it wll in these photos. How sad that people would want to vandalize it. But very cool that someone will preserve it; like PJ I too want to hear how the renovation goes!

Virginia, how do you manage to make Birmingham look so much like a French postcard? I really love the closed window/open window photo. I can imagine this place in its heyday. Wouldn't it be fun to explore inside?

How do I not know about this?
I spent every summer of my childhood in Alabama! Thank you sooo much
Viginia for teaching me about my state of birth!

What an amazing place and story!
Can you please explain the words "efficiency apartments"?

I wonder what the new owners will do with the castle. I also wonder about its surroundings. Main street, top of the hill gardens with extensive views or car park?

Won't it make a cool B&B? Seriously, I would love to stay in a castle at least once in my life.

Sorry I missed your "awesome sculpture" post, I loved it.
(a pity the bottom of the bicycle was cut off).

I think museums have made tremendous progress in being child-friendly, and it's a wonderful thing. Glad Davis enjoyed this one.

Little kids are much easier to take to museums and get interested in all sorts of things than teenagers - it's a wonderful age we should take advantage of. Exposing them to culture and diversity is one of the best things we can do for them and grand-parents can be wonderful for that.

Funny to see we both post a door shot! Love your red one! Your's is on a castle when my green one is on a simple farm...
Maybe the new owners could sold their cider like my farmers do? ;-)

Nathalie,
Since I have never been inside, I can't say for certain, but usually an effieciency is a small apartment with just one bedroom/living room combination and small kitchen. Thanks for keeping me on my toes with my cropping issues. I need it!!

The castle sits atop a hill on the southside of B'ham. It is surrounded by Southern Research Inst. (the new owners) and banks, parking lots etc. There is concern that SRI may not be feasibly be able to preserve it. Supposedly our City Council is willing to buy it back in that case. I will keep you posted.

Marie Reed, We need to chat about your Alabama roots!

Wonderful building, I do hope it is retored to some kind of public space. Maybe a museum.

Apart form the fact it doens't look quite weathered enough wiuls have been convinced this was attached to a French Chatteau. What a wonderful landmark. I would never tire of this to photograph.