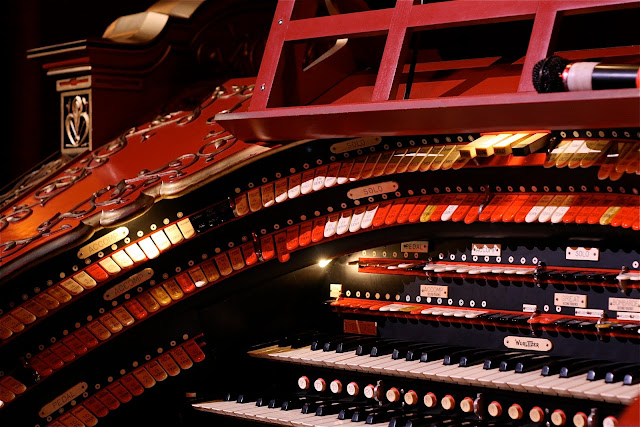 Quick, what's BIG, red and at 82 years of age can still belt out a tune? The Historic Alabama Theatre's "Mighty Wurlitzer" of course! Big Bertha, as she is affectionately known, has to be the most over the top organ anywhere! At the time the theatre was built in 1927, silent movies accompanied by an orchestra were the norm. Using an organ for smaller shows and matinees was a way to save money. I have many fond memories of afternoons spent here as a girl. Before and after the movie, the spotlight would dramatically shine on the stage and the floor would open and the organ and organist would magically rise up! From 1937 -1956 audiences were entertained by Stanleigh Malotte, who not only played but added some interesting commentary on Birmingham politics etc. The Alabama's faithful steward, Cecil Whitmire, not only oversees the preservation of the wonderful old theatre, but still plays from time to time. On my tour with volunteer and friend Tom Cronier, we were treated to a concert via the computerized system that has been installed. The Alabama Theatre is a Birmingham treasure that thankfully has been lovingly preserved.
For previous posts on the Alabama click here , here. and here
A HUGE congrats to our dear friend Bob Crowe who is celebrating his Saint Louis MO Daily Photo's 1,000th post today. Can you believe that??? Bob has to be the hardest working blogger on City Daily Photo, and might I add a terrific friend and mentor. Take a big bow B!!! 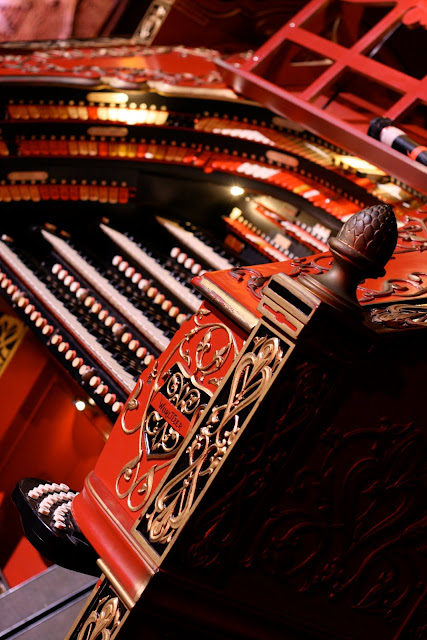 This thing is gorgeous, and "over the top" like you said. Beautifully preserved. But I can't believe you remember anything that far back.

V, What a treasure - this is just beautiful! How wonderful that they are preserving it. Your grandchildren can have fond memories of it too. Would love to hear it.

That's what you get when you're not paying enough attention - it's me Judy - almost anonymous but not quite - with this comment. LOVE the RED!

Your photographs of the organ show your tenderness toward her. She's a beauty all right.

Judy! I've been worried about you and decided was going to call you whenever I got a free moment today. Thanks for leaving a comment. BTW, my tree is up and has not one thing on it yet!!

Petrea,
The long term memory is the last to go.

Brattcat,
I do wish you could hear it.

I don't think I saw a red organ before! and I do remember having seeing a lot of them. Probably my long term memory lol
Precious!

Can you imagine learning what all those stops do? Incredible.

Wurlitzers are amazing. The last theatre Wurlitzer in Canada is in Vancouver's Orpheum, I don't think it's as big as B'ham's. I know it's not as red.

My tree is up and has lights and the angel on top (would that be the equivalent of undies and a
hat?)...otherwise naked and waiting to be dressed!!!

Terrific shots, V. I remember back in the 50s, the organs in the downtown Chicago theaters. And the shows (which included a movie) ... Jo Stafford, Jerry Vale ... they were wonderful!

V you have excelled yourself on the rouge front. These are gorgeous photos.

Hey, thanks for the kind words on my 1,000th. The thousand and first is a letdown by comparison. Got no shooting done this weekend.

Good grief, I can barely play Mary Had a Little Lamb on a piano. I can't imagine how to play this Mighty Wurlitzer.

Awww V - thanks for worrying about me! I am way behind on my comments to you but I am not nearly as creative as your other readers here - that's why they're bloggers and I am NOT. I LOVED your carousel horses!! I always say "When I win the lottery I am going to restore the carousel at our Griffith Park" - now that I know where to get horses.......I just have to win.

What an amazing instrument. And, in your favorite color!!

«Louis» wonders if anyone has played the toccata from the Widor Symphony #5 on this organ? Technically, this organ could handle this difficult piece, but stylistically, perhaps not. This organ would be voiced as appropriate for its venue and the Widor piece needs to be played on an organ voiced for a symphony hall or church. «Louis» et Mme la Vache used this piece as the recessional at their wedding.

Knock knock!
Who's there?
Wurlitzer!
Wurlitzer who?
Wurlitzer one for the money, two for the show...